What a weekend of Junior Tournament Golf we have just had as we hosted the inaugural, The Phillips Toyota Junior Open Championship 2022 at the magnificent Glenview Champions in The Villages, Florida.

Over 30 young junior players aged from 9 to 18 took part and right from day one we witnessed some exceptional golf all over the course. Day one ended with a tied leaderboard as two-times previous Claret Jug Trophy Winner Riley Sillaway, Longwood, and Brandon Godfrey, Ormond Beach both shot a highly impressive -2(70) over 18 challenging holes.

Day Two proved to be even more exciting as Brandon Godfrey started strong and pulled away from the chasing pack however it proved difficult to sustain that lead for too long for the hugely talented youngster who found difficulties dropping putts on the challenging back nine greens. After 36 holes were complete Brandon posted 70-75-145.

While that was going on, another of our top talents, three-time medal winner already this year, Zach Phan (Vanguard HS, Ocala) was making his own charge on the leaderboard. Zach had posted a creditable 76 on day one but knew going in to this one he’d need to go low if he was going to make it into the prizes…and that’s exactly what he was doing! With only one bogey preventing a flawless round and three birdies Zach went into the red and posted a -2 (70) to finish overall 76-70-146.

Having previously entertained us at this same venue in December of last year, when he shot a course record 64, youngster Riley Sillaway was quietly plotting his way around the Stirrup Cup course methodically and, as usual, with dad Jeremy providing the caddie duties. I’m starting to lose count of how many times I have watched this happen on our tour but there’s something very special indeed about how this young man plays our great game!

His talent is of course there for all to see but he’s got way more than that! So many of our young players have talent which is a necessity but this game needs so much MORE than just talent to become a strong player! When you watch this 12-year-old play with talent AND an unwavering temperament of steely determination and mental strength to be the very best out there you sense that he’s a little different from many of his peers!

Riley got the job done! Calm, effective, never flashy and ALWAYS displaying impeccable manners and respect for the golf course and his playing partners. A final round of -3(69) gave him an overall 70-69-139 to take his third Claret Jug Trophy by 6 shots from 2nd placed Brandon Godfrey and in third it was Zach Phan one behind Brandon.

We are therefore very proud indeed to report that Riley Sillaway from Longwood in Florida is now the Phillips Toyota Junior Open Champion 2022. 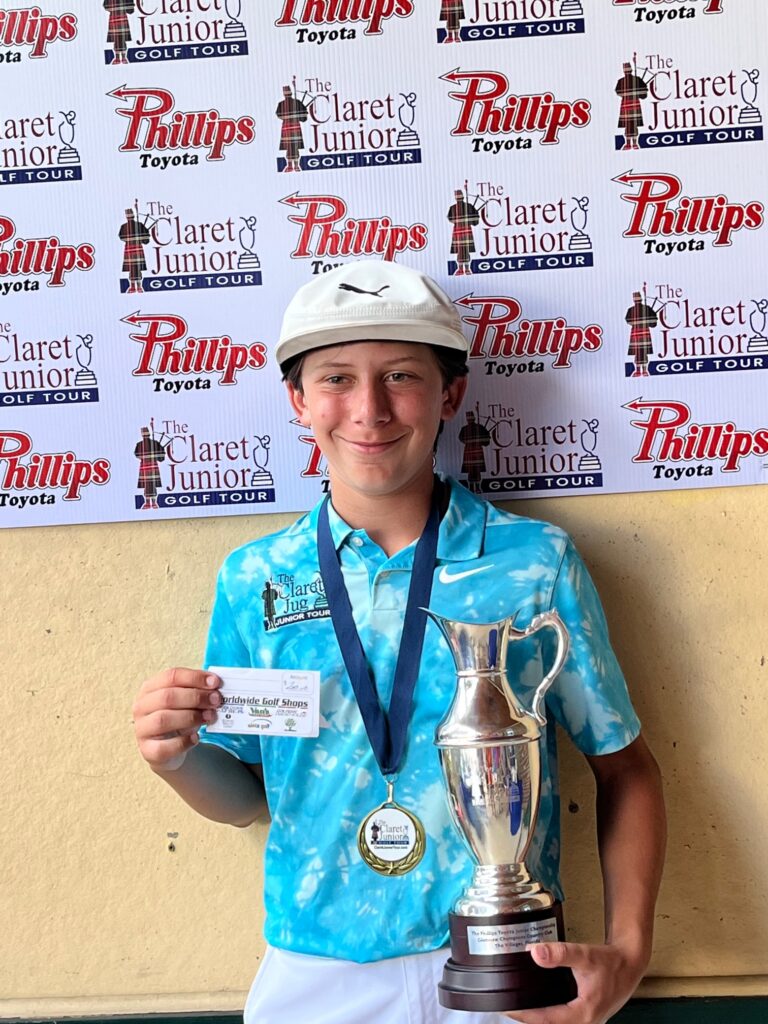 Congratulations Riley from everyone at The Claret Junior Tour and we are delighted to also pass Congratulations to you on behalf of our amazing sponsors at Phillips Toyota. Good job Riley, great work once again at Glenview Champions! 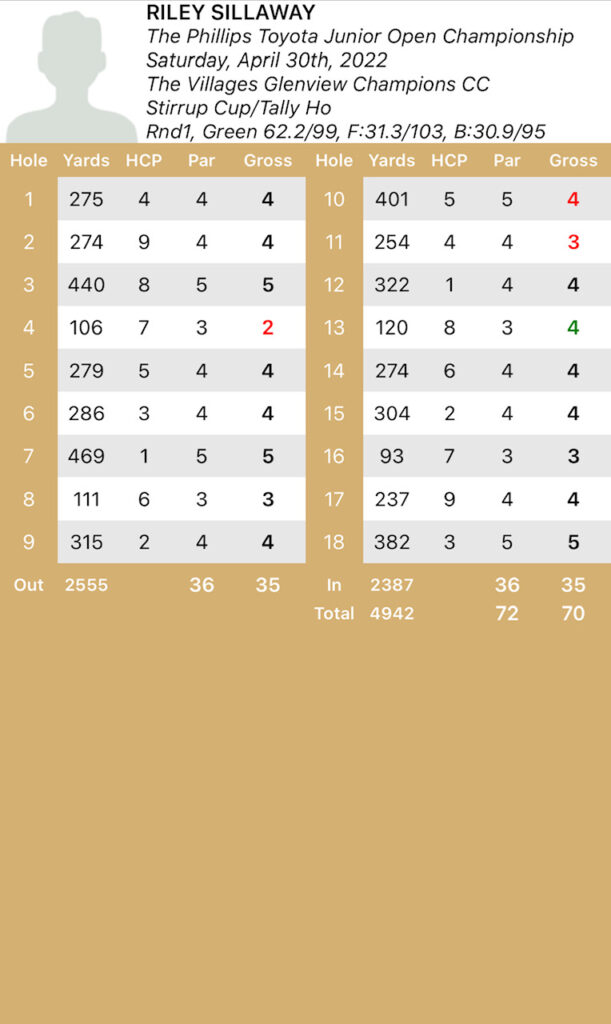 We would also like to take this opportunity to mention a few others whose performances and achievements were notable, we would love to highlight every single success story we witnessed over the past few days but really there were just SO many so apologies if we don’t get you too but here we go with just a few examples:

Ryan Oats (Lake Mary) best competition score of 74 achieved on Saturday and then beat that again with an incredible level par 72 on final day Sunday. Also picked up a nearest the pin prize on Final day too with an iron shot to 3ft! Amazing achievement Ryan, great job! But something nice to celebrate with those Edwin Watts Vouchers!

Elle Folland (The Villages) came back to tournament golf at her majestic best on Saturday putting RED on the scoreboard with her best tournament score with us, an awesome -1 (71). Great job Elle…you have still got it!!!

Delaney Sillaway (Longwood) played out her own great golf story on final day with her best score to date. A 74 from this talented young lady who’s already able to boast the fact that she’s the only junior player we have who’s already won an FHSAA State Team Champion Ring…she would if she was the boasting type, she’s definitely NOT so we do it for her! Great job Delaney who also added a prize to her weekend of great golf with a Nearest the Pin win on Day one hitting to 9 ft. Enjoy your Edwin Watts Vouchers Delaney!

The birdie count over the weekend was MAGNIFICENT…no fewer than 66 in total with with 8 of them for our Champion, Riley Sillaway. Nathan Hillan, Trinity Catholic was closest to Riley with 7 of his own. Good job Nathan!

Eagles are rare in golf but we do know that one of our two youngest competitors, 10 year old Brantley Flannery (Weirsdale) made his first competition Eagle at the par 4 11th on final day Sunday AND Brantley made it really count as it helped him achieve his lowest recorded tournament score of 79 too! Awesome Brantley, amazing job and you should have seen the size of the smile on his face ! We really LOVE what we do when things like that happen!

Ryker Huther (Sorrento) is playing his best career golf so far this year, in our opinion, he’s a very special young man with talent and fine character. Ryker went RED on final day Sunday with an impressive -1(71) This is just the beginning for this young man, watch out as he’s getting better and better. Good job Ryker!

Rhett Kirkland’s +2(74) on day one is, we believe, his best competition round yet! That excellent round got him a place among the leaders on final day and another big experience under his belt. He did really well and put up a spirited final day display. Rhett is still only 11, a local Villages kid and one with a HUGE future. Rhett will play a starring role in lots of future lead groups and we can’t wait to be watching him take center stage in the future. Great job Rhett, just keep doing what you are doing young fella!

Braxton Williams is another of The Villages talented young players who has worked really hard to find consistency in his game. It all came together on final day Sunday with an exceptional triple birdie round of +1(73) Great job Braxton, we predict LOTS more days like that to come for you!

Luke Wood (Inverness) showed us again how good he can be in competition as this experienced 16 year old (how did Luke and some of these other kids suddenly get to be 16?) showed us his best with a level par final day round of 72. Great to see you playing so well Luke, good job!

Our youngest competitor, 10-year-old Reagan Smith (Lady Lake) showed once again that he’s going to thrive on big occasions like this, a 79 on day one and an 80 on final day Sunday were impressive for one so young. Like Rhett and Brantley these kids really ARE the future of our game and Reagan is a great example of what we can all look forward to, he’s a huge talent who could become an exceptional junior player!

As many of you know we do like to highlight and celebrate achievements in junior golf. These come in many forms as you can see from the above. They don’t necessarily mean you win a prize but regardless they should be noted. On Day one Tyler Budill didn’t have a great day at Glenview however what we know, and what we EXPECT of this young Villages player is resilience, character and the mental strength to get right back out there and do better next time! That’s exactly what he showed us by slashing no less than 14 strokes off his Day one total on final day Sunday. That’s why we recognized him at our awards ceremony. Good job Tyler for a spirited comeback! 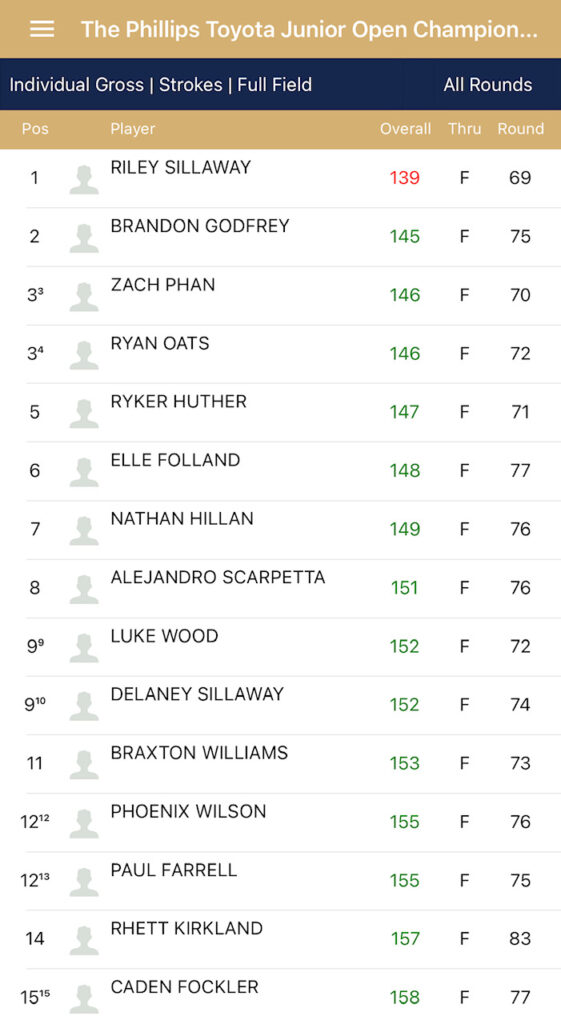 So those are some of our stories, not all and apologies again if I missed you but there was a LOT going on!

In closing this one out we want to say this, Junior Tournament golf is all about FAMILY! We firmly believe that and so do our Sponsors. We provide opportunities for young players to play a game that is all about them as an individual sportsman, it’s NOT a team sport, there’s no hiding place behind team mates and no one else to blame if things go wrong!

Golf is TOUGH! It challenges the player to master both the physical and mental aspects of the sport while demanding the very best of character traits be displayed at all times. Respect, Honesty, Integrity and Courtesy. A good young golfer needs all of those tools, and more, in his bag!

In this junior version of our sport support mainly comes from the sidelines …from Mom, Dad, Siblings and often Grandparents too. They provide unwavering support and feel every good, and every bad shot but they can’t get the job done for the player, only the player can play the game!

When the job is finally done and the kid did great…the FAMILY then become the TEAM and they all celebrate together! We captured these images yesterday as Riley became The Phillips Toyota Junior Open Champion. Well played the Sillaway TEAM! Enjoy the moment, its ALL about FAMILY!

Thank you everyone for a great weekend. It was a good one, we hope you agree! Thank you Phillips Toyota and Tony Viero for your amazing support…we, our players and their families very much appreciate it.

Next up for us it,s a one-day tournament return to our home venue of Eagle Ridge GC on Saturday May 7th. Registration is open now and can be found by clicking HERE